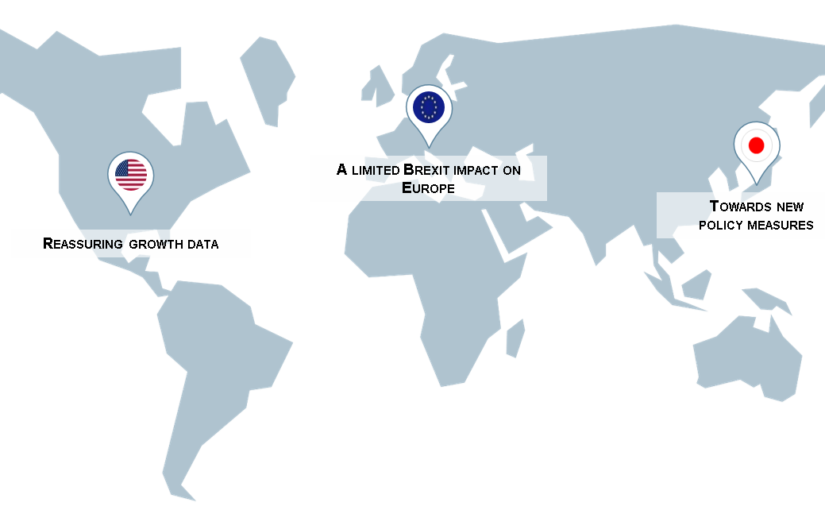 After a very healthy first quarter, growth is expected to have come to a standstill in the spring, although not to the extent of indicating the start of a slowdown. Statistics are subject to wide monthly variations: Industrial production declined by 1.3% in May after rising 1.4% in April, and retail sales rose by 0.2% and 0.4% in April and May, following a 0.6% decline in March. By contrast, the PMI indices have been relatively stable since February at around 53.0, a level consistent with growth in the region of 1.5%. First indications for the month of July suggest that the UK’s vote will only entail a limited impact on mainland Europe’s economy.

The unemployment rate continued its decline to reach 10.1%, a record low since June 2011. It stood at this level before the Eurozone crisis plunged Europe back into recession. Given this context, consumer confidence remains at acceptable levels and the UK vote does not seem to have had any major effect. In July, confidence fell from -7.2 to -7.9, which is still far higher than its historical average.

According to the European Central Bank survey, banks continued to relax their credit extension conditions in the second quarter and indicated ongoing growth in demand. Furthermore, credit terms are also improving. In the first five months of the year, new private sector credit totalling more than 100 billion euros net was extended, compared with 30 billion euros for the same period in 2015.

The Spanish elections resulted in the Podemos strategy failing. The party had sought to ally with other extreme-left parties, thereby forcing the Socialist Party into a minority position within a leftwing coalition. In the end, Podemos kept the same number of seats, well behind the Socialist Party. Mariano Rajoy’s Popular Party (PP) also gained ground, though not enough for a majority. Negotiations are underway to find a solution, which in any case will revolve around the PP. The new Government will have to negotiate with the European Commission, which has just launched proceedings against both Spain and Portugal for exceeding their deficit targets. Both countries risk fines of up to 0.2% of GDP. 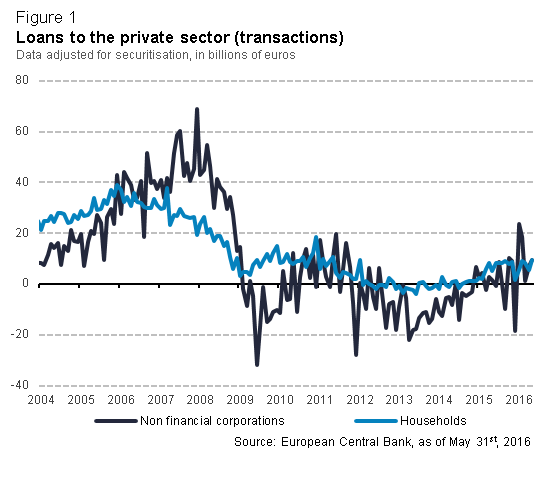 US household spending is still surprising to the upside. Spending figures for both April and May were already good (+0.8% and +0.3%) and retail sales have risen again, this time by 0.5% in June. Only a drop in June’s car sales softens the message, but it is likely that spending will have progressed by more than 4.0% on an annualised basis in the second quarter. This should significantly contribute to growth gaining pace, following on from +1.1% in the first quarter.

The trend is expected to remain positive, at least judging by ISM indices: in the manufacturing sector, new orders are accelerating and the overall index reached 53.2, its highest level since February 2015. The non-manufacturing index also recovered to post 56.5 after dipping in May. Investment in the oil sector, which significantly dragged on economic growth, should stabilise judging by the active rig count data. Residential investment is also on the right track.

June’s job report was particularly reassuring. After plunging close to zero, job creations in June rebounded very sharply to reach 265,000 in the private sector, their highest level since last November. A rebound in the participation rate caused the unemployment rate to bounce from 4.7% to 4.9%. Since then, weekly unemployment claims have remained at extremely low levels, a sign that the labour market is not about to slow down. Hourly wages rose by 2.6% over 12 months, a level last reached in December 2015 as well as being the highest since July 2009.

Even if the markets exclude an increase in rates at the Fed’s July 27th meeting, the probability of an increase by the end of the year, which had been reduced to zero after the UK referendum, is now in the region of 40%, in particular due to economic data that remains solid. With the US equity markets reaching new heights, a rise in rates could take place as early as September if the next releases remain healthy. 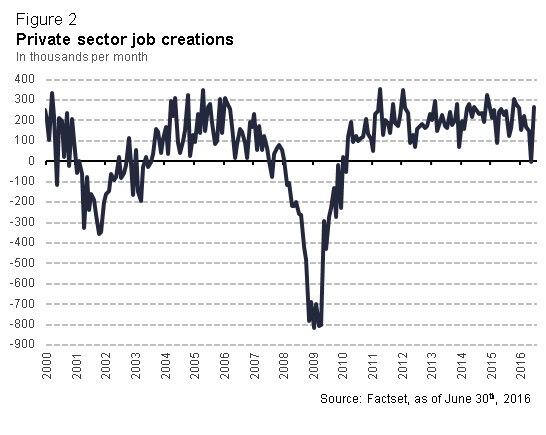 Against all expectations, Japanese GDP sharply rebounded in the first quarter, increasing at an annualised 1.9% having previously contracted by 1.1%. Household and government spending account for most of the growth, while both residential and non-residential investment levels were down.

Even if spending seems to be on the right track, second quarter GDP growth is likely to be lower, due in particular to weakness in industrial production, which can be partially explained by a mid-April earthquake in southern Japan. May’s 2.6% decline should give way to a rebound in the next two months, according to company forecasts.

The decline in the unemployment rate has slowed and unemployment has settled at 3.2%, its lowest level since 1995. Japan may now be close to the frictional unemployment rate, because the number of job offers per applicant is still increasing, reaching its highest level since 1991. However, salaries are struggling to improve. Even if the acceleration in March had given just a glimmer of hope, May’s annual 0.2% fall in average salaries is clearly disappointing.

Added to this is the strength of the yen which approached parity at 100 JPY to 1 USD, triggering numerous official statements intended to weigh on parity. As a result of the yen’s rise, inflation is slowing down. Excluding fresh food and energy, the BoJ’s preferred measure, year-on-year prices moved down from +1.3% in December to +0.8% in May.

Against this backdrop we could, in the coming months, witness a combination of fresh monetary and fiscal policy measures. Indeed, Haruhiko Kuroda has stressed both the need to break with the deflationary mindset and the ability to act on the various dimensions of monetary policy. Shinzo Abe, following his victory at the elections in early July, has indicated that the government will work on a stimulus package and on new measures to be announced in September. 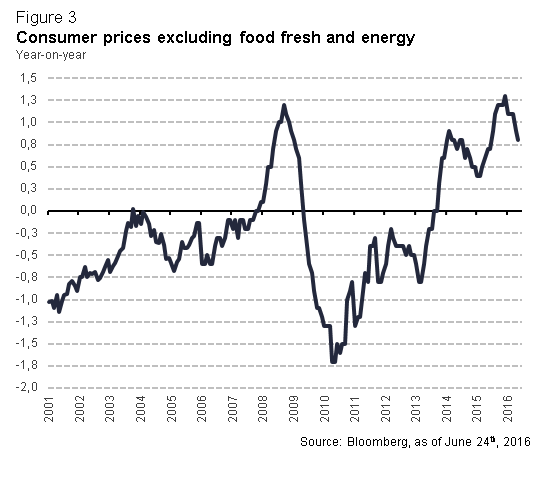 The opinion expressed above is dated July 2016 and is liable to change.