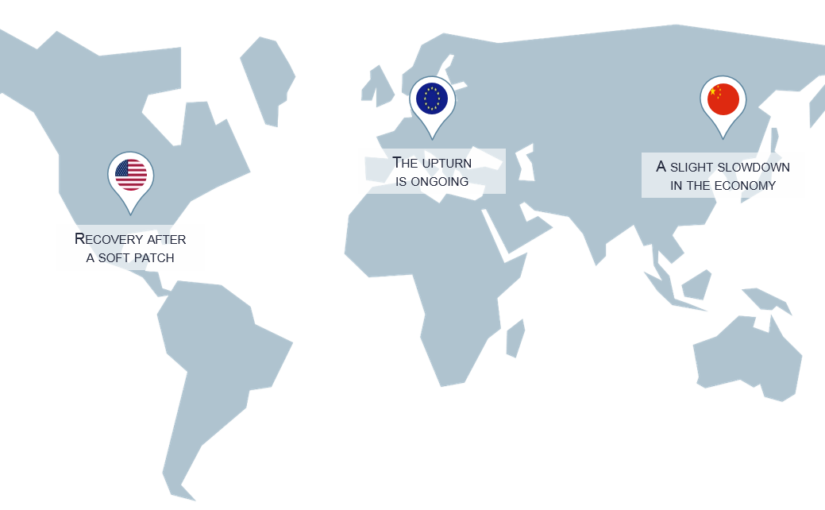 Eurozone growth remained strong during the first quarter. According to the latest Eurostat flash estimate, which gives no detailed breakdown, growth rose at an annualised pace of 2.0% versus 1.8% previously.

Confidence surveys suggest that Eurozone growth is gathering pace. The Eurozone flash composite PMI matched its previous 56.8 reading, a level in line with annualised growth in the region of 3%. The PMI surveys continue to improve in France (57.6 versus 56.6) and Germany (57.3 versus 56.7), both hitting 6-year highs. Consumer confidence in the Eurozone is also buoyant, with the European Commission’s index at its highest level in 10 years.

Inflation gathered pace with the headline rate moving up from +1.5% year-on-year to +1.9% and the underlying rate excluding food and energy rising from +0.7% to +1.2%. However, Easter-holiday calendar effects distorted the data due to temporary price hikes, especially for travel and package holidays. These effects are expected to diminish in May.

The ECB’s minutes from its April 27th meeting opened the door to a shift in its forward guidance at the next meeting on June 8th, whilst highlighting the need for caution to avoid any sharp reaction from the financial markets.

US growth was weak for the first quarter of 2017. The BEA’s second estimate came in at an annualised +1.2% versus +2.1% for the fourth quarter of 2016. The softening was mainly down to weaker household spending and inventories. Given the weakness in both January and February’s spending data, this did not come as a surprise. However, the good news is that both non-residential and residential investment spending are still gathering pace.

The ISM surveys are in line with a growth rebound and the numbers for March reflect better private spending. With household income and confidence levels on the right track, spending can be expected to continue in the months ahead. Given the current rate of inventory accumulation, it is unlikely that changes in inventories in the next quarter will hurt growth to the same extent.

April’s employment report confirmed the positive US economic picture. Following disappointing numbers in March, new job creations reverted back to the 200,000 level and the unemployment rate fell from 4.5% to 4.4%, marking a record low since the spring of 2007. Year-on-year hourly wages dipped slightly to +2.5% versus +2.6% in March. However, the most comprehensive measure of changes in labour costs is currently at its highest rate since 2008 at an annualised +3.2% for the first quarter of 2017.

Inflation has been low for two months. In a rare occurrence, March’s inflation excluding food and energy fell and, contrary to expectations, April’s number failed to compensate at a rather weak +0.1%. These two months mark the smallest change since the start of 2010. As a result, 12-month underlying inflation has slowed to +1.9%, its lowest level since the end of 2015.

The soft inflation reading is all the more surprising as no specific element of the goods and services basket is responsible. The next few months will provide a clearer picture, but it is unlikely that this weakness portends a new downward trend. In the absence of negative signals from the job market, the inflation data is unlikely to deter the Fed from raising rates at its June 13th-14th meeting. However, rhetoric accompanying the decision may find itself adjusted accordingly.

Following a better-than-expected first quarter, the latest economic data are showing a slight slowdown in growth at the start of the second quarter.

April’s retail sales slowed to +10.7% in April versus +10.9% in March and despite both favourable base effects and higher inflation. A drop in car sales (+6.8% versus +8.6%) for the second consecutive month was a major drag, whilst retail sales excluding cars remained stable.

Investment also slowed from +9.4% year-on-year to +8.2%. This was chiefly due to a pull-back in the manufacturing sector partly reflecting attempts to reduce overcapacity. The investment slowdown was softened by increases in spending on infrastructure and property.

April’s industrial output dipped to +6.5% year-on-year versus +7.6% in March. The slower pace was in part down to poorer performance by the automotive and commodities sectors as car sales slowed and metal prices fell.

After a brisk 2016 for the property sector, both house sales and property prices have softened, although the effects have not yet filtered through to housing starts which have risen +17.5% year-on-year.

PMI survey data are also suggesting a slowdown in both manufacturing, where the official index fell back to 51.2 in April from March’s 51.8 reading, and the service sector, where April’s reading fell to 54.0 from 55.1 a month earlier.

April’s foreign trade data were disappointing but monthly fluctuations aside, the overall trend remains positive within the context of improving world trade. Whereas exports and imports fell in 2016, they have both risen year-to-date at +8.1% YoY and +20.8% YoY respectively.

Credit expansion remained broadly stable in a month that saw both tougher financial supervision and tighter market liquidity, which had led to fears of a credit contraction. This indicates that the authorities are aware of over-depending on credit-fuelled growth.