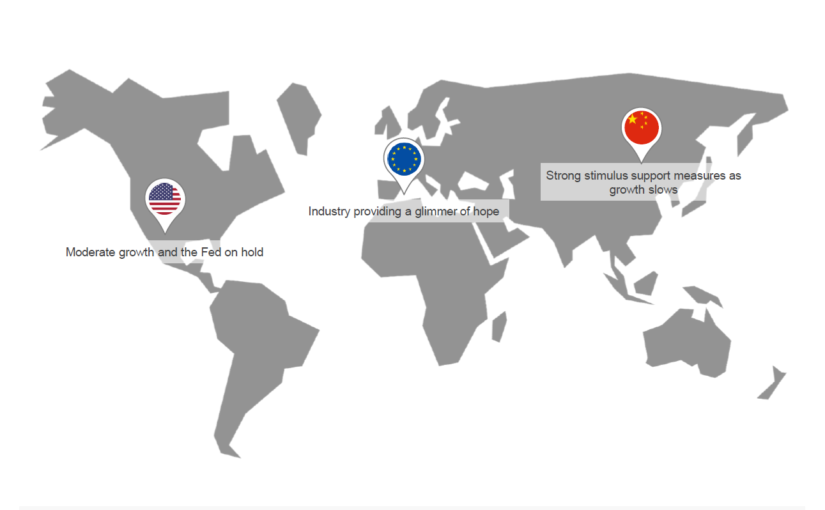 Industry providing a glimmer of hope

Third-quarter growth for the eurozone was almost unchanged from the previous quarter, rising from 0.8% to 0.9% on an annualised basis. In terms of per-country breakdown, German growth jumped from -1.0% to +0.3%, and Spain saw its growth rise from 1.5 to 1.8%. Italian growth was stable at 0.3% while for France, growth slipped from 1.4% to 1.0%. A breakdown will be published on December 5th.

November’s PMI1 surveys were weaker than expected. While the consensus was for a rise, the eurozone composite PMI index fell from 50.6 to 50.3. This was despite higher readings for both Germany (+0.3 points to 49.2) and France (+0.1 points to 52.7), indicating a broadbased deterioration in PMI readings across the rest of the eurozone.

The hardest hit sector was services where the PMI fell 0.7 points to 51.5. In contrast, the manufacturing PMI survey results were a pleasant surprise. The eurozone manufacturing PMI improved for the second month in a row, reaching 46.6 following 45.9 in October, although the number remains very low.

Similarly, Germany’s manufacturing PMI rebounded, but remains in negative territory at 43.8. September’s manufacturing goods orders were more positive, rising 1.3% for the month. When stripped of the volatile items, the orders number rises to 1.5%, having stabilised at 2015–16 levels in recent months. This upturn could gain pace given the more positive outlook in terms of both Brexit, with a lower probability of a no-deal exit, and the US-China trade war, with an agreement appearing more likely.

Elsewhere in the eurozone, Spain’s legislative election failed to deliver a clear majority. Together, the PSOE and Podemos have struck a coalition government deal that will now have to win a confidence vote with a simple majority. If the alliance succeeds, then we can expect recent reforms to be undone, State spending to increase and taxes to rise accordingly. That said, a coalition dominated by the PSOE would be positive for the relationship between Spain and the European Commission2. If the alliance fails to form a viable government, then fresh elections will likely be called.

PMI1 : PMI indices are confidence indicators that summarize the results of surveys conducted among company purchasing managers. A value greater than 50 indicates a positive sentiment in the sector concerned (manufacturing or service).

European Commission2: the executive branch of the European Union, responsible for proposing legislation, implementing decisions, upholding the EU treaties and managing the day-to-day business of the EU.

See also : Eurozone: is the 2% inflation target a step towards macroeconomic instability?

Moderate growth and the Fed on hold

US growth was almost unchanged in the third quarter, with the annualised number inching down to 1.9% from 2.0% in the second quarter. Private domestic demand remains the main growth driver, followed by Federal spending and then residential investment spending, which turned positive for the first time in six quarters. In contrast, corporate investment spending fell for the second straight quarter and at a faster pace. Both inventory adjustments and the trade balance detracted slightly from growth.

Data for the start of quarter four have been a mixed bag. October’s retail sales numbers reflect healthy consumption levels, while building permits show ongoing improvement in the property sector. In contrast, the manufacturing sector is waning with October’s fall deeper than last month’s (-0.7% following -0.5% previously). Manufacturing is struggling with weaker car production numbers due to strike action, but non-car manufacturing levels are also lower, and the manufacturing ISM1 index remains weak at 48.3 for October compared with 47.8 for September. That said, the ISM and PMI2 manufacturing indices are currently diverging: the PMI has been improving for three months and the flash estimate for November is 52.2.

Despite the manufacturing slowdown, the employment report for October showed a still-healthy labour market. Private sector job creations have slowed to 131,000, but data for the previous two months were revised sharply higher and the latest reading was affected by the General Motors strike action: employees who went unpaid during the period were excluded from the data. The unemployment rate rose from 3.5% to 3.6% due to a higher labour force participation rate and overall hourly wages remained stable at +3.0% year-on-year.

The Fed cut rates for the third time this year at its October meeting in a move that came as no surprise and takes the target range for the benchmark Federal Funds rate to 1.50–1.75%. During the press conference, Jerome Powell stated that benchmark rates were now at an appropriate level and should remain unchanged for as long as data reflect moderate growth, a strong labour market and inflation close to 2%. In other words, the Fed is now officially on hold and not looking to cut rates in the near term.

ISM1: this index is divided into two main families: the manufacturing ISM, reflecting the health of the sector in the USA, and the services ISM, more specific to tertiary activities.

PMI2: PMI indices are confidence indicators that summarize the results of surveys conducted among company purchasing managers. A value greater than 50 indicates a positive sentiment in the sector concerned (manufacturing or service).

Fed Funds3: in the United States, federal funds are overnight borrowings between banks and other entities to maintain their bank reserves at the Federal Reserve. Banks keep reserves at Federal Reserve Banks to meet their reserve requirements and to clear financial transactions.

Following a sharp rebound in September, October saw economic indicators retreat. Year-on-year, industrial production slowed from 5.8% to 4.7%, retail sales from 7.8% to 7.2% and investment spending from 4.7% to 3.4%. Weak domestic demand can be explained by both the ongoing slowdown in car sales and slower infrastructure spending. Meanwhile, investment in the manufacturing sector saw a timid rise.

In terms of foreign trade, exports came in at -0.9% versus -3.2% previously and imports at -6.4% versus -8.3% previously (year-on-year). Exports to the US also shrank by less than previously at -16.2% versus -21.9% year-on-year, which could be linked to the US administration’s decision to suspend the customs duties increases that had been scheduled for October 15th.

The divergence between the two indices can be explained by the fact that the Caixin PMI gathers data primarily from private sector small and medium-sized exporters, whereas the official PMI focuses on larger companies with greater exposure to the domestic economy. We can reasonably assume that the Caixin PMI is more sensitive than the official PMI to any trade truce.

Inflation continued to tick up, reaching 3.8% versus 3.0% year-on-year in September, with the difference primarily due to the price of pork more than doubling over the year. Core inflation remains stable at 1.5% year-on-year.

In a bid to boost growth, the government has announced further support for infrastructure investment by easing the capital requirements set for certain types of projects. In addition, the central bank eased monetary policy by cutting its one-year medium term loan rate from 3.30% to 3.25% for the first time since 2016. This is the central bank’s new reference lending rate since it reformed its interest rate structure this summer. The central bank also lowered its seven-day reverse repurchase rate3 by 5 bps from 2.55% to 2.50% for the first time since 2015.

PMI1: PMI indices are confidence indicators that summarize the results of surveys conducted among company purchasing managers. A value greater than 50 indicates a positive sentiment in the sector concerned (manufacturing or service).

Caixin2: PMI indicator of the strength of the Chinese economy. It’s a closely-watched gauge of nationwide manufacturing activity, which focuses on smaller and medium-sized companies, filling a niche that isn’t covered by the official data.

Reverse repurchase rate3: the rate at which the central bank of a country borrows money from commercial banks within the country. It is a monetary policy instrument which can be used to control the money supply in the country.

The opinion expressed above is dated 26 November 2019, and is liable to change.