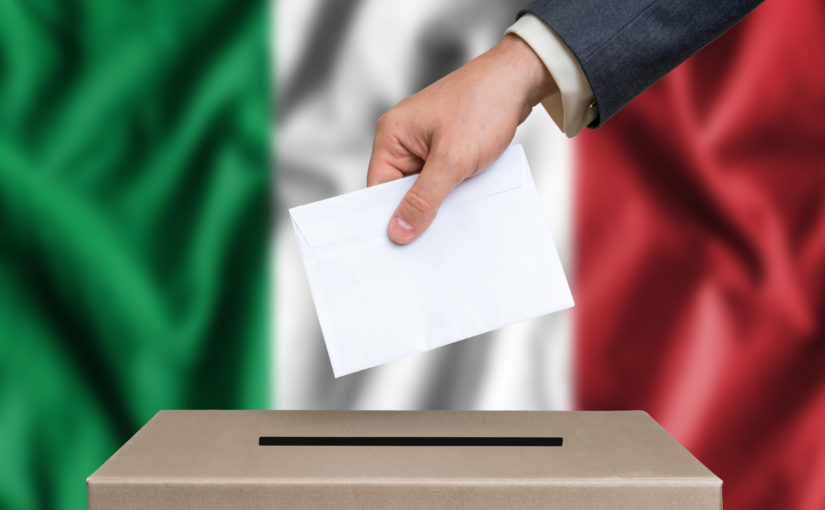 On December 4th, Italy’s citizens will vote in a referendum on constitutional reform aimed at ending the country’s chronic political instability. Although the polls suggest a victory for the “No” camp, hasty conclusions are to be avoided, as much will depend on what happens next.

Italy’s economic woes are far-reaching and long-standing. In the third quarter of 2016, the country’s GDP had risen a mere 2% above the level seen in the first quarter of 2000. Only Greece has performed worse, and with the exception of Portugal, all of the other Eurozone countries have seen their GDP grow in excess of 20% over the period. Indeed, since the start of the 2000s, Italian growth has been systematically below that of the Eurozone (see Figure 1). 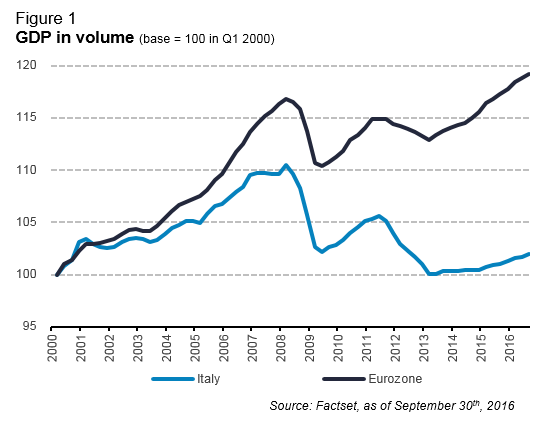 This miserable performance has not led to any major imbalances. Unlike the situation in countries such as Spain, Italy’s current account is not a major issue: the deficit reached 3% of GDP in 2010 as compared with Spain’s 10% in 2007. Italy’s budget deficit reached 5% at the height of the economic crisis, and since 2012 has been consistently below the 3% threshold.

Despite a very favourable environment (a weaker euro, falling oil prices and low interest rates), Italy’s economy has started to grow again two years later than the rest of the Eurozone, and growth remains weak (+0.9% year-on-year). This underperformance is due to significant structural issues made worse by problems in its banking system, which is still burdened by numerous bad loans (12% versus 6% in Spain).

The country’s structural issues stem from a lack of productivity growth stretching back almost fifteen years (see Figure 2), and for which there are several main reasons including lower education levels and significant rigidities hindering reallocation within and across sectors. Demographic forecasts indicate that over the next few years, the fall in the working-age population will intensify. Together, these factors underline just how important it is for Italy to implement structural reforms. 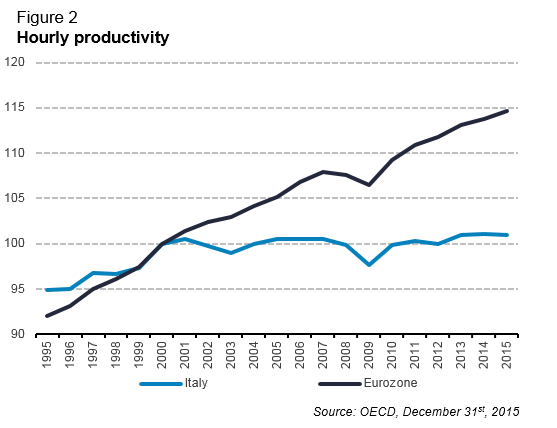 The need for faster reforms and an end to Italy’s traditional history of political instability are the main reasons given by Prime Minister Matteo Renzi for reforming the country’s constitution. The draft reform was approved in April 2016 following two years of parliamentary debate. The aim is to overcome Italy’s ‘perfect’ bicameralism with both the Chamber of Deputies and the Senate holding exactly the same powers. Current voting systems in the two houses can lead to conflicting majorities and consequently to significant political instability as coalitions change, and to periods of gridlock such as during the 2013 general election.

In broad brush terms, the reform aims to change the role of the Senate, forming a smaller upper house comprising representatives from regional councils (100 down from 315) that would be chiefly concerned with interaction between the State and local authorities. The Senate would retain the same powers as the Chamber of Deputies for issues of constitutional change, electoral law, and treaty ratification. However, it would no longer have the power to approve governments and budgets.

In more concrete terms, the reform makes the Chamber of Deputies the country’s main decision-making body. Since the electoral reform of May 2015, known as the “Italicum”, the Chamber of Deputies is elected in such a way as to guarantee a clear majority. If one political party secures more than 40% of the first-round votes, it automatically takes 340 seats out of a total of 617 in the Chamber. The remaining seats are then allocated proportionally. If no party achieves a majority, there is a second-round vote between the two leading parties from the first round. The winner then takes the 340 seats and the remaining seats are allocated according to the first-round scores of the other parties that each won more than 3% of the vote. These reforms combine to enable the party that wins the legislative election to retain power for the full five-year term of the legislature mandate without being challenged.

The electoral law was adopted with constitutional reform in mind. If the reforms are rejected, the Senate’s electoral law will have to be changed to avoid a situation similar to that of 2013 when a lack of a Senate majority paralysed the country for two months. Even if the reforms are accepted, this highly criticised electoral law, which has been the subject of proceedings at the Constitutional Court, could still find itself being modified: given that the Senate votes per region, the voting system described above is not majority-assuring.

For both fundamental and politically convenient reasons, the draft reform has met with resistance from across the political board, with only the Democratic party and some centrist parties supporting it. Latest polls suggest the “No” vote will win, but there is still a significant percentage of ‘undecided’ voters (around 30%).

Matteo Renzi has said he will resign if the referendum returns a “No” but this fact doubtless strengthens the resolve of certain actors to use the vote as a lever to force political change. The current legislature’s term officially extends to the second quarter of 2018, but a “No” vote could prompt an early election. Polls give the Democratic Party a slight edge ahead of the Five Star Movement, at marginally above and below 30% respectively. The Northern League and Forza Italia each have 12–13% in the polls.

Democratic Party leaders have highlighted the possibility of early elections in the summer of 2017 after the vote for the new electoral law. However others, including Mario Monti, prefer to wait for the current mandate to expire with a technocratic “caretaker” government or a new Renzi government at the helm.

What are the short-term and long-term conséquences?

Unlike both the UK referendum and the US presidential election, the most likely scenario is that the reforms are rejected. Financial markets are positioned for this outcome (see Figure 3) and we believe it unlikely that there will be any major upsets following a “No” vote. Economic conditions remain favourable (the Eurozone composite PMI index is at a record high since December 2015), the ECB’s policy should limit any sharp rises in borrowing costs, and the country’s current account surplus leaves it less dependent on external funding. However, a “Yes” vote would undoubtedly be met with a sharp rebound. 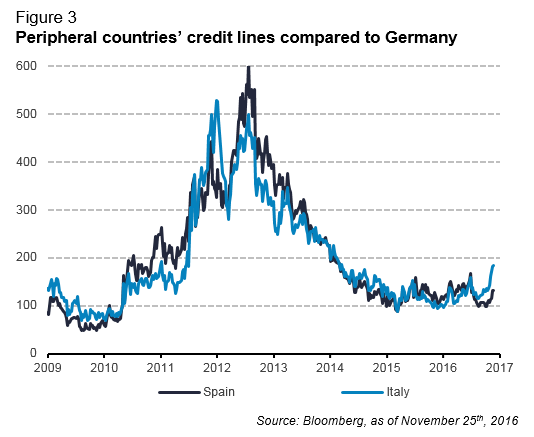 Aside from the referendum, building confidence levels over Italy to enable the country’s banks to raise the capital they need to restore their balance sheets would obviously be positive. Even if the weakest banks failed to survive, we believe the ensuing volatility would be short-term and not systemic. Here again, the equity markets appear to have priced-in this risk, with Italian bank names already down more than 50%. The most likely outcome following a “No” vote is that several months pass before the next elections, and the new electoral law will be voted in the meantime when its details are fully defined. If the economic backdrop remains favourable, the equity markets could focus on other topics until the next set of legislative elections.

In the long term, whether the “Yes” or the “No” vote prevails, what remains at stake for the country is the progress of reforms and their ability to restore confidence among Italians. Whilst business confidence has been relatively stable since the start of 2016, consumer confidence levels, although less important for tracking the economy, are a good indicator of political tension, and they have been falling continuously leaving populism as a tempting political proposition. Paradoxically, whilst Matteo Renzi’s institutional reforms aim to accelerate the pace of structural change by both giving the election-winning party a majority in the Chamber of Deputies and by weakening the Senate, they might also backfire by handing the keys of power over to the Five Star Movement. This is the party most opposed to the Renzi reforms and its main goal is to hold a referendum on Italy exiting the Eurozone.

The opinion expressed above is dated November 2016 and is liable to change.