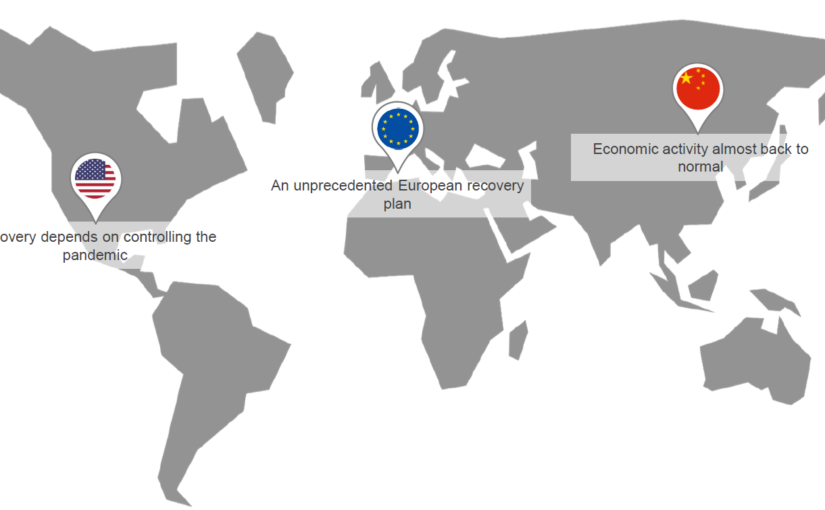 Most of the data available for the eurozone relates to May and only shows the start of a recovery, but one that appears to be faster than expected. Retail sales rebounded by 17.8%, taking them to just 7.4% below February’s level. Sizeable disparities can be seen between the nations, with Germany well ahead of normal levels and others still far below. Also in May, industrial production rebounded by 12.4% and construction spending jumped 27.9%. The unemployment rate reached 7.4%, with most short-time work not included in this figure.

In June, the (1)PMI indices continued their rebound. The composite PMI stood at 48.5, exceeding the flash estimate. The services index rose from 30.5 to 48.3, and the manufacturing index rose from 39.4 to 47.4. France’s composite PMI even climbed above 50. (2)INSEE estimated that the economy was operating at 87% of normal levels in June and the Banque de France figure was slightly higher, with the main takeaway from these estimates being that the pace of recovery is faster than expected. Eurozone vehicle registration numbers, one of the few figures available for June, appear to confirm this, having increased by 41% over the month to now sit at around 70% of normal levels.

As for the pandemic, while there have been localised Covid-19 outbreaks justifying localised lockdowns, the increase in the number of per-country cases remains very low.

At its meeting in mid-July, the (3)ECB made no changes to its monetary policy. At the extraordinary European Council meeting of 17-21 July, following 90 hours of negotiations, the European Union member states unanimously agreed on a Europe-wide recovery plan worth EUR 750 billion (5% of EU (4)GDP) to complement national measures. The plan is divided between EUR 390 billion in grants and EUR 360 billion in loans. The amount of grant aid will be linked to the severity of the pandemic’s impact on individual member states and most of the aid will be distributed in 2021 and 2022. 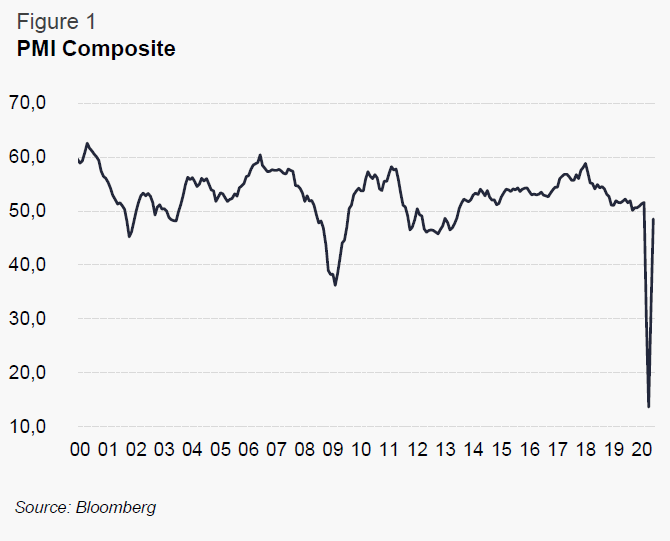 (2) INSEE: The National Institute of Statistics and Economic Studies is responsible for the production, analysis and publication of official statistics in France.

(4) GDP (Gross Domestic Product): Total monetary or market value of all the finished goods and services produced within a country’s borders in a specific time period.

Recovery depends on controlling the pandemic

June’s data confirmed the economic rebound that began in May. Job creations rose from 2.5 million to 4.8 million, lowering the unemployment rate to 11.1%. The (1)JOLTS survey showed that job vacancies started to rebound in May. Retail sales rose by 7.5% in June and are back to the levels prevailing at the start of the year. Manufacturing output rose by 7.5%, and housing starts jumped 17.3% following an 8.2% increase in May.  The (2)ISM indices continued to rebound, with the non-manufacturing index bouncing from 45.4 to 57.1, and the manufacturing index from 43.1 to 52.6.

However, in recent weeks, the rise in the number of new Covid-19 cases has continued to accelerate. While the pandemic has remained largely under control around New York, several states that escaped the first Covid-19 wave saw a sharp rise in new cases from mid-June onwards. As a result, lockdown easing strategies have been paused or even reversed by some governors and the contagion rate is starting to slow.

Currently, high-frequency data seem to be steering clear of decline and, if anything, show signs of stabilisation. The situation requires close monitoring. July’s initial survey data from the New York and Philadelphia Regional (3)Fed surveys are showing an ongoing improvement, but at a slower pace than in June. Meanwhile, the (4)NAHB home builders’ confidence survey has returned to the high levels seen at the start the year, a sign of buoyant real estate activity.

US household income data show that until May, the government’s fiscal measures more than offset the falls in household incomes and even contributed, along with lower consumption, to savings reaching extraordinarily high levels. Estimates suggest that US households saved as much in three months as they normally would in nine months. Looking ahead, of the main household income support measures, most of the relief cheques have been sent out and the unemployment benefits supplement is scheduled to finish at the end of July. Given that an abrupt end to the unemployment benefits could negatively affect consumption, the Congress and the White House are in the process of negotiating a new support package. 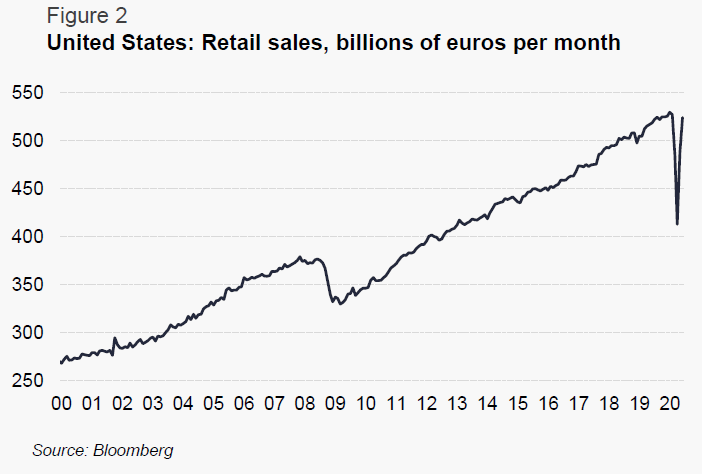 (1) JOLTS: The job openings and labor turnover survey is a survey done by the United States Bureau of Labor Statistics (BLS) within the Labor Department to help measure job vacancies.

(2) ISM: This index monitors changes in production levels from month to month.

(4) NAHB: Housing Market Index based on the sale of new homes at the present time and in the next six months as well as the traffic of prospective buyers of new homes.

Economic activity almost back to normal

China’s second quarter (1)GDP rebounded by 11.5% on a non-annualised basis after falling 10% in the first quarter. Year-on-year, growth is back in positive territory at +3.2%.

June’s economic releases confirm this recovery, while revealing certain sector disparities. Retail sales fell by 1.8%, compared with a fall of 2.8% in May. Industrial output is up by 4.8% year-on-year compared with an annualised rate of 6% prior to the Covid-19 crisis. Investment is up 5.6% year-on-year, close to its pre-crisis level and driven largely by official stimulus, which is primarily directed to infrastructure and real estate. The (2)PMI indices were positive in June: the (3)Caixin General Services index rose from 55 to 58.5, a level unseen since 2010, while the manufacturing sector index reached a six-month high of 51.2. Most high-frequency indicators also confirm this return to normal levels of activity.

The Chinese government continues to support the economy, notably via a sharp increase in public bond issuance to finance public investment and a policy of ensuring ample credit. Interest rates went unchanged in June.

A fresh Covid-19 outbreak in Beijing prompted the government to take rapid local lockdown measures, which successfully halted the spread of the virus. When the domestic spread rate fell to zero, the government was able to lift these measures. The only reported cases of Covid-19 are now imported.

Relations between China and the United States continue to deteriorate, with the US government recently ordering China to close its consulate in Houston, Texas. 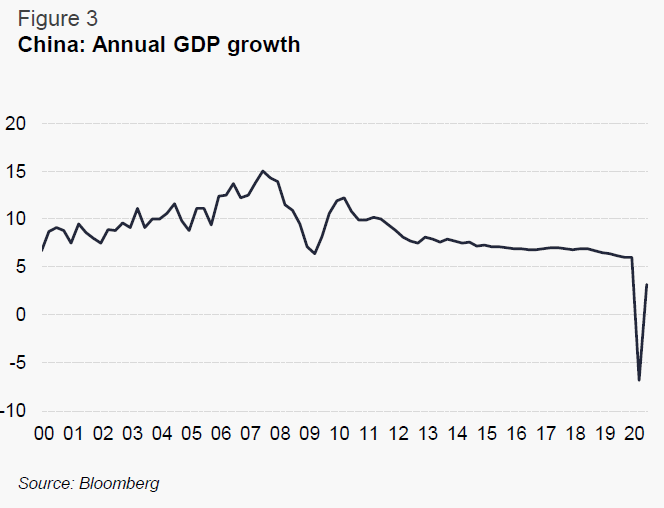 (1) GDP (Gross domestic product): Total monetary or market value of all the finished goods and services produced within a country’s borders in a specific time period.

(2) PMI: PMI indices are confidence indicators that summarize the results of surveys conducted among company purchasing managers. A value greater than 50 indicates a positive sentiment in the sector concerned (manufacturing or service).

(3) Caixin: PMI indicator of the strength of the Chinese economy.

The opinion expressed above is dated 22 July 2020, and is liable to change.