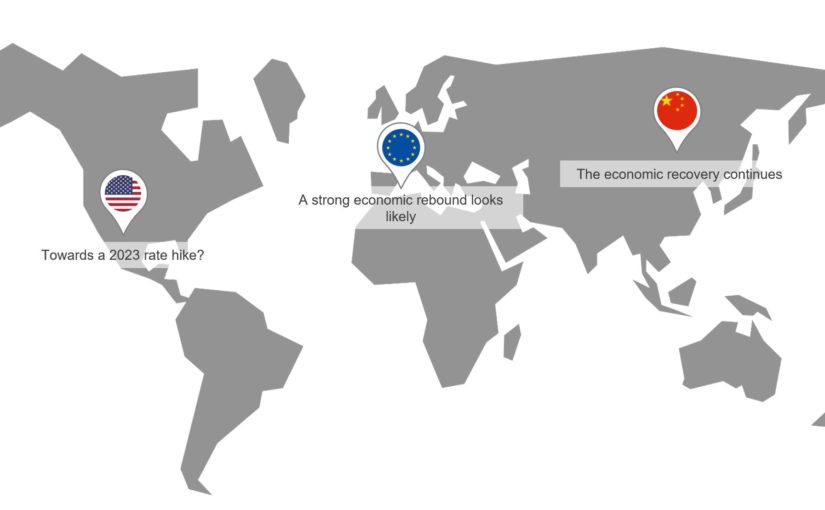 First-quarter growth was revised upwards to -1.3% from the previous estimate of -2.5%, which leaves [1]GDP running at 5.1% below its pre-crisis level. A breakdown of the various components shows that the impact of health restrictions was biggest on household spending. In contrast, investment spending held up well and changes in inventories are gradually returning to normal. Imports are recovering but at a slower pace than exports, resulting in a positive foreign trade balance.

April’s data was a mixed bag. Tighter health restrictions in the spring led to a 3.1% drop in Eurozone retail sales, while industrial output continued to recover, rising 0.8% during the month*. While industrial output has almost returned to its pre-crisis level, the recovery is unevenly spread across countries and sectors. Industry is recovering at a slower pace in France and Germany than elsewhere, while car production in the Eurozone is still 16% below its pre-crisis level.

With the health situation improving and economies reopening, [2]PMI surveys have been rebounding sharply. This is especially true in the services sector, which has been particularly affected by the restrictions. The Eurozone composite PMI rose 2.1 points in June to a 15-year high of 59.2, the services PMI rose 2.8 points to 58.0, and the manufacturing PMI remained at its lofty level of 63.1*.

Health restriction easing should allow for a strong growth rebound in the quarters ahead, although developments in the pandemic will need monitoring.

The UK for example, where the Delta variant is spreading and causing an epidemic rebound, does not question vaccine efficacy but indicates that fresh outbreaks cannot be ruled out in the Eurozone as long as vaccination rates remain modest. As of June 20th, roughly 25% of the French population had been fully vaccinated, which is half the UK figure*.

Eurozone inflation, unlike in the US, remains subdued. Consumer prices accelerated to 2% year on year in May, but this was mainly due to higher commodity prices. Excluding energy and food, core inflation remains contained at 1.0% year on year*.

Against this backdrop, the [3]ECB maintained its status quo at its meeting on June 10th. The central bank reiterated that its €1,850 billion pandemic emergency purchase program (PEPP) will continue until at least March 2022, while indicating that securities purchases will be made at a significantly higher pace in the next quarter than during the first half of 2021. 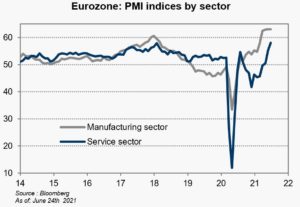 [1)]GDP (Gross Domestic Product): Total monetary or market value of all the finished goods and services produced within a country’s borders in a specific time period.

[2]PMI: PMI indices are confidence indicators that summarize the results of surveys conducted among company purchasing managers. A value greater than 50 indicates a positive sentiment in the sector concerned (manufacturing or service).

After April’s unwelcome surprise in terms of job creations, the numbers for May came in much closer to expectations at 559,000 compared with the consensus estimate of 674,000. Forecasts around the median ranged widely, reflecting the unprecedented nature of the current cycle and complicating economic forecasting. The hospitality and restaurant sector continues to drive new job creations as the US economy reopens. The unemployment rate fell to 5.8% in part due to a reduction in the active labour force.

Once again, hourly earnings surprised to the upside with a 0.5% increase for the month, and this despite many job creations being in low-paying sectors. The upward pressure on wages strengthens the hypothesis that labour is in short supply. As a result, several states have decided to withdraw the unemployment benefit top-up as of June, which otherwise may have delayed some of the unemployed from returning to work.

Retail sales are losing steam as the effects of the Federal household cheque payments scheme gradually wane, although household spending is still expected to have risen sharply in the second quarter. Business investment remains buoyant while residential investment is slowing. Low housing inventories are stalling transaction volumes and pushing up prices.

Inflation once again came in higher than expected. In May, the consumer price index excluding energy and food rose by 0.7% versus expectations of 0.5%, taking the year-on-year change to 3.8%. About a third of May’s increase came from higher used car prices, themselves due to vehicle production line disruptions.

Given that supply and demand imbalances continue to disrupt the labour market and inflation, the markets expected the Fed to maintain the status quo at the end of the two-day meeting that took place on June 15–16, giving it more time to better differentiate between temporary and longer-term factors. However, economists were surprised that several of the [1]FOMC members altered their rate forecasts.

Despite little change in economic forecasts for the next two years, a growing number of the committee members see higher rates in 2023, taking the median forecast from zero to two quarter-point rate increases. Fed Chair Jerome Powell also indicated that discussions have started over when the bank’s asset purchasing would be scaled back. 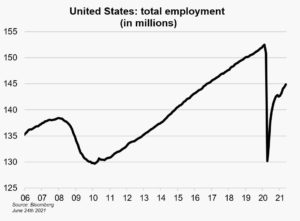 [1]FOMC: Federal Open Market Committee is the branch of the Federal Reserve System that determines the direction of monetary policy specifically by directing open market operations

Base effects continue to complicate the interpretation of economic statistics as they automatically signal a slowdown across the main indicators. Year on year, industrial output slowed from 9.8% to 8.8%, retail sales fell from 17.7% to 12.4% and investment from 10.9% to 5.5%*.

These year-on-year comparisons mask a more favourable consumption trend from consecutive readings. The figures are consistent with a slight rebound in second-quarter activity, whereas year-on-year growth will indicate a sharp slowdown due to the higher comparison base.

For the time being, inflationary pressures remain modest. While higher commodity prices are driving production prices up sharply (+9.0% year on year, a record since 2008), this is having little impact on consumer prices, which are up by only +1.3% year on year.

However, the Chinese authorities are wary of the rise in commodity prices, which could squeeze manufacturing margins and accelerate inflation. The government has consequently tightened its futures exchange regulations in order to curb speculation and announced that it would be making some of its strategic metal reserves available to manufacturers.

The central bank indicated that it would not be using the exchange rate to compensate for the higher import costs related to higher commodity prices. On May 31st, the bank announced that it was raising the reserve requirement ratio ([1]RRR) for financial institutions’ foreign currency deposits from 5% to 7% starting June 15th, the goal of which is to restrict foreign exchange liquidity and temper upward pressure on the yuan.

The Chinese currency should continue to benefit from favourable balance-of-payments dynamics (trade surplus currently at its highest level, government bond inflows resulting from China’s inclusion in certain indices). However, the yuan is unlikely to embark upon another upward cycle like the one that has taken place since May 2020 given that the growth and interest-rate gap with the US is set to narrow as the American economy catches up and that of China gradually returns to normal.

In terms of reform and just a few weeks after the nation’s 10-year census results showed a record low birth rate, the Chinese authorities have announced the end of the two-child policy to allow up to three children. Accompanying measures will be taken to encourage births and tackle population ageing, including lowering education costs and extending the retirement age. 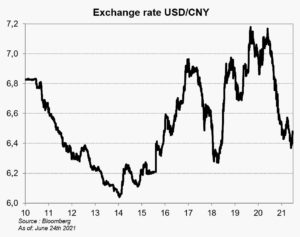 [1]RRR: reserve requirement ration is a central bank regulation that sets the minimum amount of reserves that must be held by a commercial bank

*Source : Lazard Frères Gestion and Bloomberg as of June 24th 2021

The opinion expressed above is dated June 24th 2021, and is liable to change.