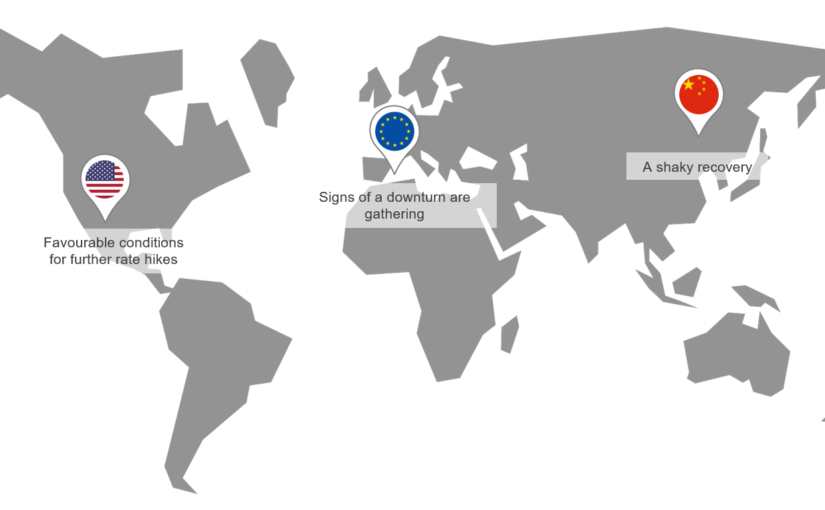 September’s employment report reflects a resilient US economy and stubborn inflation that the Fed is attempting to curb. Job creation numbers have slowed but remain high at 263,000 overall and 288,000 in the private sector. The unemployment rate is back to its pre-pandemic lows of 3.5%, driven in part by a drop in the participation rate to 62.3%. Hourly wage growth has slowed from the summers of 2021 and 2022 but remains above the pre-Covid average.

August saw a sharp decline in the number of job openings. While this may be a first sign of easing in the tight labour market, the fall-off remains to be confirmed. The ratio of offers per job seeker, which reached 1.8 in August, will need to be monitored. During his Jackson Hole Symposium speech at the end of August, Fed Chair Jerome Powell stated that he wanted to bring this ratio back to around 1 and that a sustained period of below-trend growth may be necessary to achieve it.

For the moment, economic conditions do not tally with the onset of a recession. Several indicators remain positive and the Atlanta Fed’s nowcast model estimates a return to growth as early as the third quarter. Household spending is expanding at a reasonable pace, but foreign trade is expected to be the strongest growth contributor. In contrast, residential investment is again expected to be a drag, as business in the sector continues to decline. Higher interest rates are dampening housing demand and property prices began to fall in July.

September’s inflation numbers were again very strong. While the headline year-on-year number fell slightly to 8.2% from 8.3%, the rate excluding food and energy rose from 6.3% to 6.6%, its highest level since 1982. Easing supply chain pressure led to slower goods inflation but in services inflation continues to gather pace. Noteworthy are the price rises in accommodation, transport, and medical services.

With no real signs of a slowdown in the labour market and inflation, the Fed is expected to maintain the pace of rate hikes. The FOMC is expecting an additional 125 bps of rate hikes by the end of the year. By the end of 2023, short-term interest rates could reach 4.50–4.75%. If we rewind 12 months, the same panel had expected rates nearer to 1.00%, illustrating a radical change among central bankers who are now firmly focused on fighting inflation. 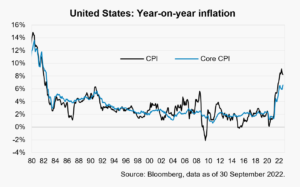 Signs of a downturn are gathering

The latest economic releases point toward an economic backdrop that continues to deteriorate. September’s eurozone composite PMI* index fell from 48.9 to 48.1, indicating a slight economic contraction. The downturn has not yet led to a rise in the unemployment rate, which remains at a low of 6.6%. That said, we are beginning to see a labour market shift in countries that publish their data relatively promptly, such as in Germany where 4,000 jobs were eliminated in August. While the current economic downturn remains moderate, the full impact of the energy crisis has yet to be felt as governments ramp up their support measures.

Germany’s government has announced it is ready to deploy a massive ‘Protective Shield’ of up to €200 billion over two years, equating to more than 5% of GDP. The support will be used both to cap energy prices and bail out energy companies. It will be financed by new borrowing, but the proceeds will be channelled through the Economic Stabilisation Fund, an off-budget structure set up in 2020 during the Covid pandemic to support ailing businesses. At the European level, the European Commission has proposed new measures to tackle rising prices and protect gas supplies. These include joint gas purchasing, price-correction mechanisms, EU member state solidarity, and ongoing efforts to reduce demand for gas.

Price caps are helping to limit energy price rises but inflation remains exceptionally high. In September, year-on- year inflation rose from 9.1% to 9.9% and the rate excluding food and energy rose from 4.3% to 4.8%. While the difference between the headline and core measures are in large part due to soaring energy prices, a growing number of goods and services prices are also rising sharply. When the inflation number is broken down into 94 items, over half had risen more than 5% in September, indicating broad-based inflationary pressures.

Despite stubbornly high inflation, further economic weakening could persuade the ECB to pause its rate hike process at the end of 2022 following two further and possibly significant increases (50–75 bps each in October and December). Such a pause would leave time to assess the impact of the ECB’s action. The market is currently pricing-in 100 bps of additional rate rises in the first half of 2023, which would bring the deposit rate up to around 3%. 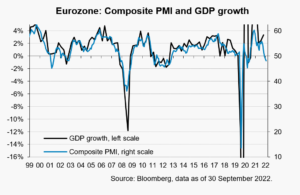 [1]PMI: PMI indices are confidence indicators that summarize the results of surveys conducted among company purchasing managers. A value greater than 50 indicates a positive sentiment in the sector concerned (manufacturing or service).

Recent indicators point to a gradual rebound in third-quarter growth following the second quarter’s 10% fall in annualised GDP. Infrastructure investment continued to rise, increasing by over 15% year-on-year in a sign that the government’s support measures are working. In April 2022, President Xi Jinping called for all-out efforts to be made to construct infrastructure.

That being said, the economic recovery remains shaky, as evidenced by September’s deteriorating PMI readings. Declines were more pronounced in the services sector than in manufacturing amid tighter health restrictions. In September, several major cities were partially or totally locked down (Shenzhen, Chengdu). Although most of the restrictions have since been lifted, the start of October marked fresh increases in the number of new Covid-19 cases.

For the time being, there are no real signs of improvement in the property sector, which is at best stable. In August, property-related investment expenditure fell 13.8%, home sales dropped 24.5%, housing starts plummeted 45.7%, and prices sagged 2.1% on a year-to-year basis. To alleviate the liquidity squeeze hitting property developers, the government announced a special loans programme as well as government guarantees for certain bond issues. Measures have also been taken locally to boost property sales.

This economic picture provided the backdrop for the 20th Congress of the Chinese Communist Party. President Xi Jinping’s opening speech focused on long-term goals while giving little indication of economic policy direction in 2023. The President specified that economic development remained a top priority and renewed his ambition to raise China’s GDP to the level of “medium-developed” countries by 2035. This message has been interpreted as a renewed commitment to double GDP by that date, which would imply an ambitious average annual growth rate of 4.7%.  President Xi Jinping defended the benefits of the zero-Covid strategy and messaging surrounding the property market remained broadly unchanged, reiterating that housing is for accommodation and not for speculation. In terms of foreign policy, President Xi Jinping repeated his goal of reunification with Taiwan, stating that the Party will continue to do its utmost to achieve peaceful reunification but that it does not rule out the use of force. 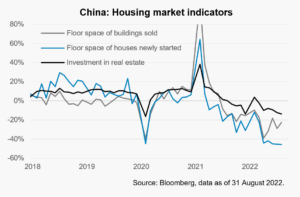 Source : Lazard Frères Gestion and Bloomberg as of October 21st 2022

The opinion expressed above is dated October 21st 2022 , and is liable to change.