China’s currency and stock market turmoil has sent shockwaves through the financial markets, which got off to one of their worst ever starts to a calendar year. Whilst stock market volatility can be put into perspective given the specifics of the Chinese market, the currency shifts are a different matter.

Investors are focusing on the yuan-dollar exchange rate which has fallen by almost 6% since August 11th, when the Chinese authorities introduced a new system for setting the central parity rate to better reflect market forces and ahead of the currency’s inclusion in the IMF’s Special Drawing Rights (SDR) reserve-currency basket, which is meant to happen next year. Since then, the Chinese central bank has said that its goal of stabilising the currency shall be measured against a weighted basket of several currencies (the CFETS RMB index) rather than against the dollar alone. Indeed, the Chinese currency is relatively stable when referenced to this basket. 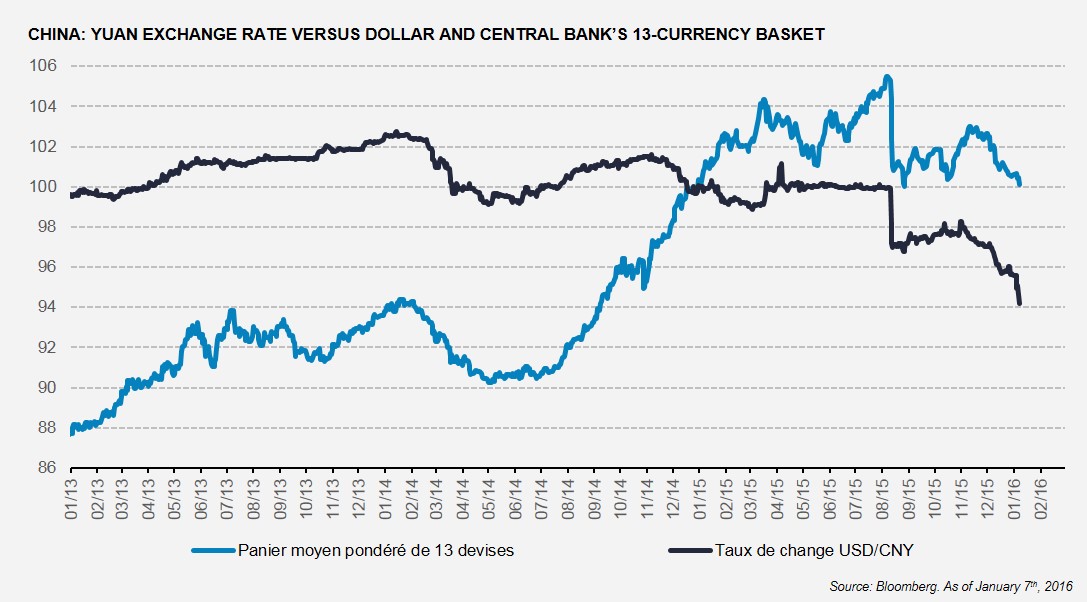 Two observations can be made to understand the mechanisms involved.

1.Firstly, the yuan had tracked the dollar’s rise since mid-2014, whilst the Chinese economy itself was already slowing down. In response to the slowdown, the Chinese central bank lowered rates several times, making yuan-denominated investments less attractive. The now more flexible yuan is naturally reflecting this reality.

2.Secondly, significant capital outflows from China have been observed, which are putting downward pressure on the Chinese currency. The decline in foreign exchange reserves, by 200 billion dollars over the past two months, shows that despite discourse to the contrary, the Chinese authorities have sought to minimise the pressure.

The Chinese economy is slowing down as a result of its transition towards more consumer-led growth. The Chinese authorities will be guiding this shift with the tools available to them, particularly monetary policy of which the yuan’s decline is a consequence rather than the goal. These changes will ultimately be favourable for the global economy, despite the uncertainty surrounding the transition period.