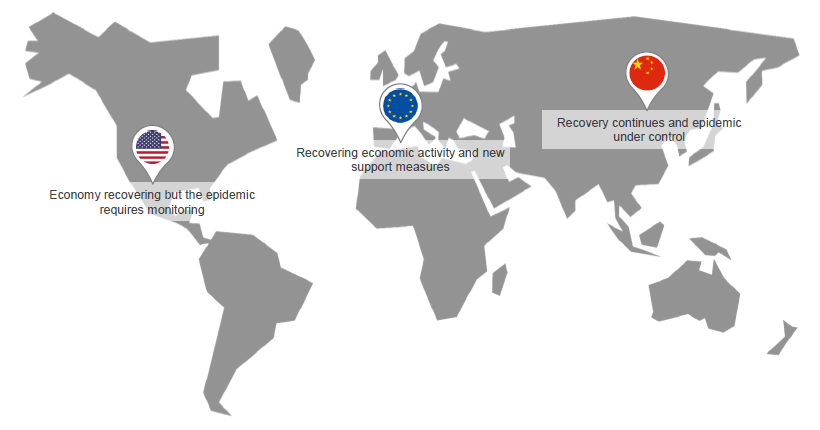 June’s eurozone flash (1)PMI indices show a continuing rebound in activity, with the composite PMI rising from 31.9 to 47.5. The Markit PMI indices rose from 39.4 to 46.9 in the manufacturing sector and from 30.5 to 47.3 in the services sector. The upturn in the composite PMI was sharper in France, where it rose from 32.1 to 51.3, than in the eurozone or in Germany, where it rose from 32.3 to 45.8. While the gradual return to normal for the PMI surveys is welcome news, deducing a corresponding level of economic activity is challenging.

Economic data for the eurozone in April continued to reflect the impact of the lockdown arrangements. Industrial production fell by 17.1% following a 11.9% drop in March, retail sales fell 11.7% in April after falling 11.1% in March, and construction spending fell 15%, the same as in March. The trade surplus collapsed from EUR 25.5 billion to just EUR 1.2 billion due to a 24.5% drop in exports and a 13.0% drop in imports. Initial data for May are more positive. Vehicle registration numbers rebounded strongly over the month, rising from 202,000 to 484,000, compared to an average monthly level of 941,000 in 2019.

Eurozone unemployment rose from 7.1% to 7.3% in April. However, the number is being underestimated because of distorted data from Italy (6.3% following 8.0% previously) where many have exited the active labour force. In Germany, the unemployment rate rose to 6.3%, compared with 5.0% at the beginning of the year.

The plan includes 57 measures, including a reduction in (2)VAT from 19% to 16% until the end of the year (EUR 20 billion). However, the exact amount of these new measures remains uncertain.

In terms of monetary measures, the (3)ECB has raised the size of its (4)PEPP programme from EUR 750 billion to EUR 1,350 billion. The programme is being extended until June 2021 and includes automatic reinvestments until the end of 2022. The ECB has organised its long-term refinancing operation so that banks can access funding at -1%. They took-up EUR 1,310 billion, which is at the high end of the estimates. When refinancing is taken into account, net new liquidity amounts to over EUR 500 billion. 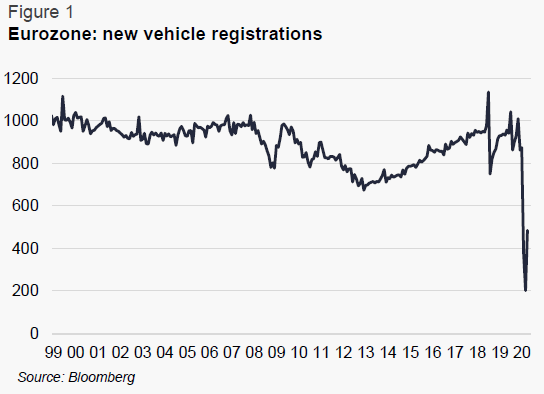 (2) VAT: (Value added tax): a type of tax in European countries that is paid by the person who buys goods and services.

(4) PEPP (Pandemic Emergency Purchase Program): a plan to purchase debt on the markets in order to lower the financing costs of governments, businesses and households.

The monthly employment report for May came out well ahead of expectations. While the consensus was for several million job losses and a further rise in the unemployment rate, the figures instead showed that 2.5 million new jobs were created and that the unemployment rate had receded from 14.7% to 13.3%. Hourly wages fell by 1.0% following April’s 4.7% increase and the labour force participation rate rose from 60.2% to 60.8%. Although the weekly data suggest a less favourable situation, they also tend to be less reliable than the monthly series.

Household consumption rebounded by 8.1% in volume terms in May. The rebound was particularly strong for durable goods, which returned to their level at the beginning of the year. Incomes surprised on the upside by dropping only 4.2% for the month after a 10.8% increase in April. Wage income rose by 2.5% and the total amount of transfers fell: the total amount of cheques sent to households was divided by four, but unemployment benefits continued to rise. The rebound in consumption and the fall in income caused the savings rate to fall to 23.0% after rising from 12.7% to 33.0% in May.

Industrial production rebounds less than retail sales. With an increase of only 1.4% in May, it remains 15% below its pre-crisis level. However, the manufacturing confidence surveys in June sent positive signals, with the PMI improving from 39.8 to 49.6. Orders for capital goods are declining but are not collapsing for the time being. The same applies to construction spending. Sales of new homes and compromised sales of older homes rebounded strongly in May.

Against this backdrop, the US economic recovery appears to have started in May and is perhaps progressing faster than expected amid widespread lockdown easing. The recovery is expected to continue but the rebound in the number of new cases of coronavirus since mid-June should be monitored. The acceleration mainly concerns the southern and western states (Florida, Texas, Arizona and California in particular) which have had to reintroduce some restrictions, in particular the closure of bars. For the time being, the increase in the number of new deaths remains moderate, contrary to what has been observed in the eastern states.

At the end of the (1)FOMC members’ meeting on 10 June, Jerome Powell indicated that the (2)Fed did not plan to raise rates before 2022 and that it would continue to support the US economy. He did not, however, announce any new measures. 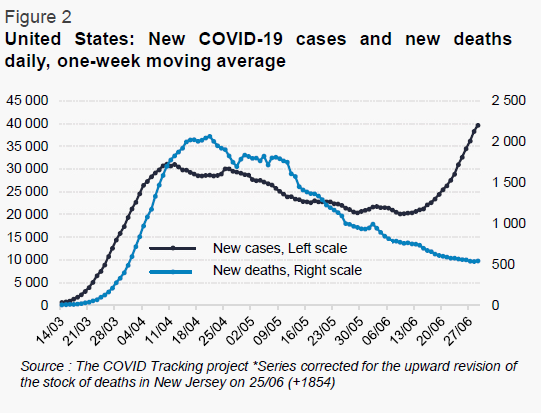 (1) FOMC: The Federal Open Market Committee is an organ of the Fed responsible for overseeing all open market operations (notably the purchase and sale of government securities) in the United States.

Recovery continues and epidemic under control

The rebound in investment is primarily due to increased spending on infrastructure and real estate, which rose by 8% year-on-year. In contrast, manufacturing sector investment spending remains down at 5.3%.

In terms of consumption spending, the various retail sales components show a rebound in car sales, which are now up 3.5% year-on-year. Some improvement has also been seen in certain Covid-19-hit sectors, such as food and catering. While activity appears to have bottomed out, the level is still well below that of a year ago, with sales down 15.4%.

Business is also improving in the real estate sector. The contraction in housing starts has slowed to -0.9% year-on-year and home sales have increased by 9.3% year-on-year following -1.5% in April. House prices, however, continue to slow gradually. The average price change index for 70 cities rose by 5.0% year-on-year compared with 5.2% for the previous month and a 6.8% increase in 2019.

Exports surprised on the upside for the second month in a row, posting a decline of 3.3% in May, about half as much as expected. It would appear that this good resistance is partly explained by the increase in exports of anti-covid products (surgical masks, gowns, gloves, …). Imports fell by 16.7% year-on-year, reflecting the fall in oil prices, which are measured in value terms.

Credit growth continues to accelerate in line with the central bank’s monetary easing measures. The credit stock is now growing at an annual rate of 12.5%, compared with 10.7% before the crisis. The increase is even more striking in terms of amount, with the cumulative amount of credit granted since the beginning of the year reaching a record high.

The emergence of a new epidemic outbreak in a wholesale market in the city of Beijing has led to a rebound in the number of new cases and a partial containment of the capital. However, the latest figures show a slowing of the epidemic, which does not appear to have spread to the rest of China. The Chinese authorities claim that the situation is now under control.

PMI surveys surprised on the upside in June: the average of Caixin’s manufacturing PMI and NBS rose from 50.7 to 51.1 and the services PMI from 53.6 to 54.4. They are thus back above their January level, before the sharp decline in February. 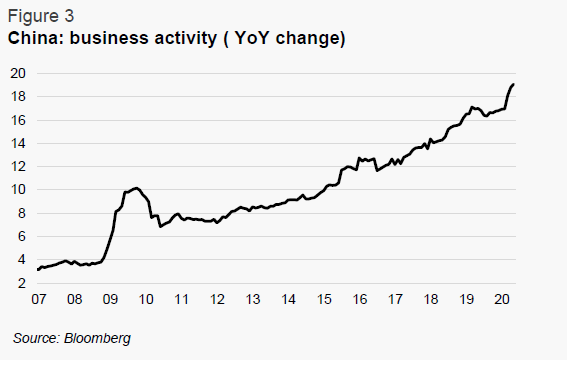 The opinion expressed above is dated 22 June 2020, and is liable to change.