In the first chapter of our analysis entitled “Rising interest rates: how will a rate hike impact equities” we took a macroeconomic approach and concluded that a rise in interest rates, as long as it doesn’t come in response to an inflation spike, is not a threat to the equity markets. In this second chapter, Régis Bégué, Head of Research and Equity Management at Lazard Frères Gestion, shares his microeconomic analysis, where he highlights the twofold impact of a rate hike on equities via both valuations and earnings. He explains how a stock’s profile shapes these potential impacts.

Rates have been falling almost continuously on both sides of the Atlantic for over twenty-five years, setting an underlying trend subject to few, and moderate, distortions. The interest rate curve has flattened to the point of flirting with 0% yields on both short- and long-term rates (Graph 1). 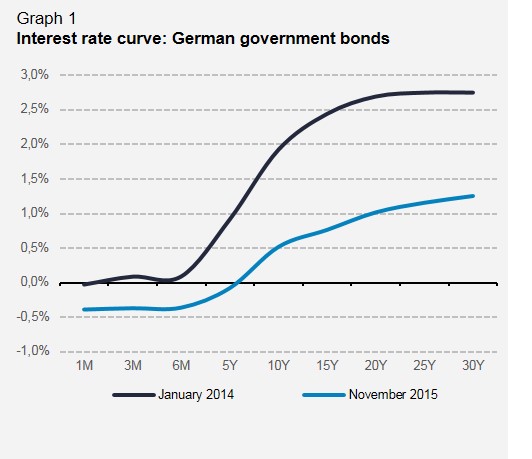 Against this backdrop, it seems reasonable to turn our attention to the consequences of an almost inevitable rise in interest rates. In the bond markets, a rise in rates leads to a decrease in bond values, which is more marked the longer the duration of the bond. In equity markets, it’s not quite that simple.

At least three rate scenarios can be distinguished for our purposes, each of which could entail a different impact on equities:

Moreover, an important yet often overlooked point is that the impact of an increase in rates on equities is twofold:

Stock valuation is linked to long-term interest rate expectations. The value of a company chiefly depends upon the present value of its future cash flows discounted at the weighted average cost of capital, which itself partially depends upon the level of the risk-free rate.

A company’s long-term business visibility tends to improve in lockstep with stable profitability or structural growth. Accordingly, a larger part of its valuation will be linked to its distant future cash flows. Thus the company’s valuation will behave more like a long-term bond. This is why the discount rate chosen is crucial in determining the fair value of growth stocks.

Conversely, an industrial company whose activity is cyclical in nature and sensitive to the economic backdrop is likely to be valued based on its short-term cash flows. In this case, interest rate levels are of lesser importance for valuations. Paradoxical as it might sound, cyclical stocks, although more volatile, can prove less sensitive to interest rate fluctuations than those traditionally considered as “defensive”.

During periods of low interest rates, growth stocks tend to reach higher valuations than cyclical stocks and often outperform when rates are falling. This is one of the reasons why the pharmaceutical or consumer staples sectors have performed so well in recent years: they offer growth and visibility in a low-rate environment favourable to these types of stocks. Conversely, the higher the rates, the more important the present becomes relative to the future. When rates are high, stocks whose businesses thrive in economic upturns reach higher valuations. (Graph 2). 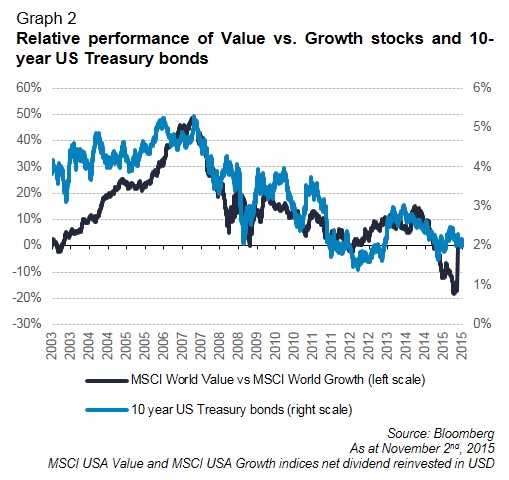 In addition to the nature of a company’s cash flows, there is also the question of their distribution. Assuming the company adheres to a reasonable shareholder remuneration policy, current dividend yields are the most tangible sign of the company’s capacity to distribute high and sustainable dividends. From this point of view, the period since 2011 has been quite remarkable.

This has led to an unprecedented situation in recent history where equity yields now exceed those of government bonds (Graph 3). 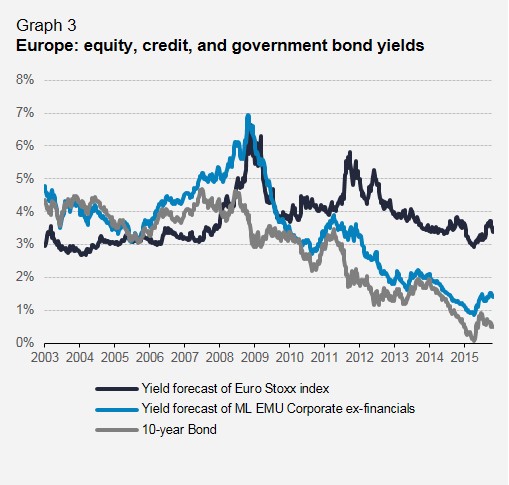 Institutional investors, in their quest for yield, have tended to favour companies that regularly pay generous dividends, hence the significant outperformances of listed infrastructure, insurance and listed real estate stocks. Should rates tighten, these stocks are likely to experience profit taking.

Our overview would be incomplete without mentioning the valuation of liabilities. Whilst the case of financial debt is clear cut, non-financial liabilities must also be discounted. The present value of a company’s future expenses (for example pensions, compensation outlays, or the decommissioning of mines or nuclear power plants) is deducted from the value of a company’s assets. The lower the discount rate the higher the cost of these future expenses.

Companies with significant liabilities of this nature have therefore suffered from the extremely low rate environment. Noteworthy here is that the real discount rate (i.e. the gap between the risk-free rate and the expected long-term inflation scenario) is the one that counts. So with a long-term rate of 5% and expected inflation of 2%, the real discount rate would be 3% which is indeed quite reasonable. However, what happens when rates are at 1%? Should we be discounting at zero or even negative rates? Opening this Pandora’s box would mean a significant leap into the unknown. It would be absurd to believe that the more the cash flows are distant, the greater their present value. A normalisation of long-term rates combined with subdued inflation should lead to healthier performance of stocks with significant non-financial liabilities.

A recovery in risk-free rates could also impact companies’ net profitability. This impact will be all the more significant for a company financially indebted to third parties (such as to banks or on the bond markets) or even through the very nature of its business. Insurance companies and banks are prime examples.

The contribution of net financial income for these companies is significant. The premiums they receive are chiefly invested in low-risk bonds. The higher the bond returns, the higher the company’s net earnings.

Conversely, a highly leveraged company will see its cost of financing increase as its maturities come up for renewal.

In the case of money market investments or guaranteed-rate life insurance policies, the higher the rate granted to the subscriber, the more the bank or insurance company can afford to take a significant margin. Retaining a 0.1% to 0.2% margin on an investment paying 3% is possible. However, it is considerably more difficult to retain a significant margin when the gross initial yield is just 0.5%!

Steepening, a major consideration for some sectors

Short-term rates generally remunerate corporate cash. If it is abundant (if working capital requirements (WCR) are negative) as is the case, for example, in food retail, rising short-term rates are good news. 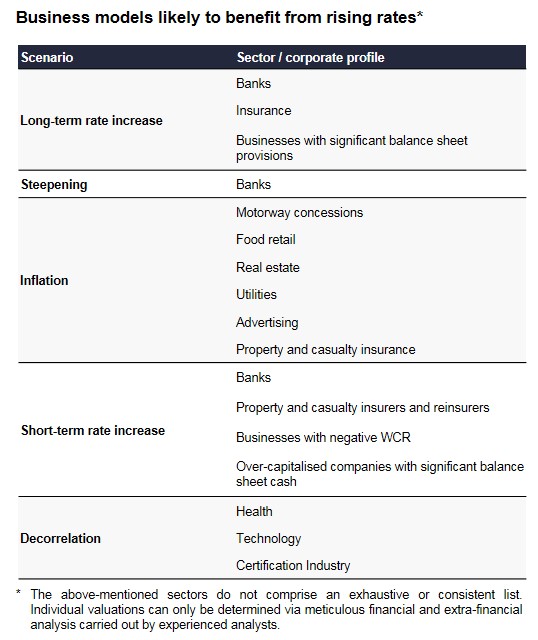 We have seen that rate increases come in several shapes and sizes. Whether they affect short-term rates, long-term rates or both together, rate increases can impact equity markets both at the valuation and income statement levels. In some cases, the effects will cumulate: doubly positive or doubly negative. In others, the effects will work in opposite directions. The task of the financial analyst is to assess the magnitude of such effects and draw conclusions for stock market performance. In any event, the behaviour of stock markets faced with increasing rates is likely to contrast sharply with that observed since 2008.